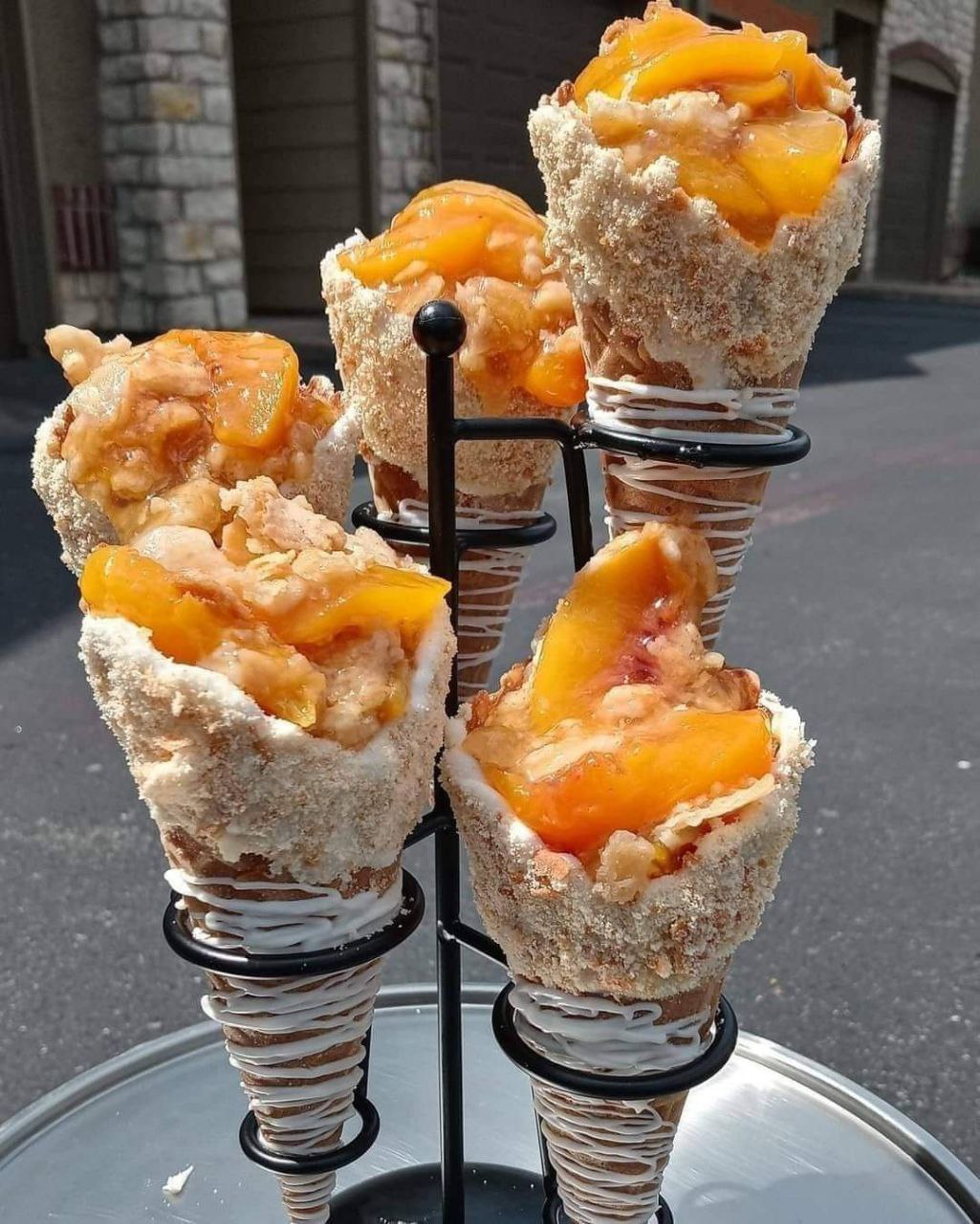 Peach Cobbler Cones
constituents
For The Cones
6 Waffle ice cream cones
1C. White chocolate chips
2 Tbsp. Coconut oil painting
6 Cinnamon graham crackers base into motes
For the peach cobbler
1 Large can of peaches in juice
½C. Butter divided
¼C. Brown sugar
1 tsp. Cinnamon
¼ tsp. Nutmeg
⅓C. Diced pecans
4C. Butter or pound cutlet atrophied
For The Cheesecake Buttercream
2 Sticks of adulation softened
1 tsp. Vanilla
4C. Powdered sugar
2 Tbsp. Heavy trouncing cream
Cheesecake pudding blend
Instructions
Preheat the roaster to 350 degrees. Place the white chocolate chips and the coconut oil painting in a microwave oven-safe coliseum and heat at 30-alternate intervals until fully melted and combined.
cover the inside of each blin cone with the white chocolate, and place on a diploma or silicone mat lined baking distance to set.
Place ¼ mug of melted adulation into the bottom of a 9×9 baking dish, and swirl around to fleece unevenly.
Add the canned peaches, brown sugar, 1 tsp cinnamon and ¼ tsp nutmeg into a coliseum, and mix to combine.
Place the peach admixture into the baking dish and cover with the cutlet crumbles, ¼ mug of sliced cold adulation and pecans.
Singe for 25- 30 twinkles and let cool. cover the upper ⅓ of the outside of the blin cones with the white chocolate and incontinently sprinkle with the crushed graham crackers.
Mix together the 2 sticks of adulation and the cheesecake pudding blend together until delicate.
Add 1 tsp vanilla, 4 mugs pulverized sugar and 2 tbsp trouncing cream to the mixing coliseum, and beat on high until delicate and ethereal. Pipe some of the cheesecake buttercream into the bottom of each cone.
Add a bit of the peach cobbler admixture to the cones. Place another subcaste of cheesecake buttercream to the cones, and eclipse them off with another bit of the peach cobbler admixture.
mizzle some of the melted white chocolate over the top of the cones and serve.